Faith, confidence, and science, in relation to the teachings of the Buddha 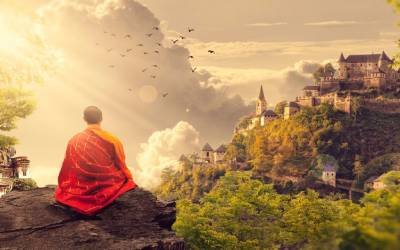 Faith, confidence, and science, in relation to the teachings of the Buddha  – Layananda Alles

“Buddhism” is referred to as a religion, a philosophy or a way of life. Many suggest that it is congruent with science.  As lay people is it faith or confidence that we have? The word “Shradhdha” is translated both as faith and as confidence. Faith implies belief, especially about a virtue, or an idea or a notion within a religious system. Confidence implies ‘freedom from doubt; reliance in yourself and your abilities, a feeling of trust’.Religion may be defined as a way of life or a discipline based on faith in an external agent. The religious framework provides and defines the moral values required to exist within the community. In secular societies such moral values and the discipline comes about from the laws enacted for this purpose. Philosophy is a study of general problems concerning matters such as existence, knowledge, truth, beauty, justice, validity, mind, and language. This is distinguished from other ways of addressing these questions (such as mysticism or mythology) by its critical, systematic approach and its reliance on reasoned argument.

Those who are spiritually strong with a commitment to a belief system, have a way of life based on their respective belief systems. Buddha’s teaching does not fall into any of these categories; but may also fall into all of these categories at the same time. Buddha’s teaching is not based on beliefs. It is based on experiential development of the mind. Today it is also a religion to many people in the world. They live very useful and purposeful lives based on the belief of the virtues of the Buddha, Dhamma and the Sangha. This aspect is called “Buddhism”; it is a label, and an ‘ism’ to describe a way of life and a religion.While Buddha did not prescribe a way of life by using His teachings as a basis of a belief system, He did not ridicule it either. Buddha did not encourage arguments to further philosophical viewpoints. Arguments or discussions He found to be futile and had the tendency to derail the prime purpose of searching and finding that inner peace which was the core prescription of His teachings.

There is a school of thought that validating Buddha’s teaching through discoveries in science adds credence and increases the applicability to the modern way of living using science and technology. There is however, a fundamental problem. Scientific discovery is based on external observations of phenomena. Unfortunately, as Einstein found out, using probes such as light to investigate sub atomic particles, change their natural behavior invalidating any subsequent observations and deductions. Hence, he searched for mathematical, non-invasive tools to ensure proper scientific observation. To this date, external observations of the activities of the mind have met with very little success; one reason is that the experiments change the behavior of the very object being observed. Also, it is extremely important to note that as Buddha discovered, mind is not a static object, it is dynamic and is conditioned to change from moment to moment.

The Buddha made the discoveries through internalized observations. He followed a highly scientific methodology in this quest. Yet superficial validation through science of some aspects of the Buddha’s discoveries does not make Buddha’s teachings any more relevant, significant or acceptable because of the fundamental limitation of modern science. Buddha’s prescription was to experience the dynamism of the mind in order to understand its inner workings.

What was the approach taken by Siddhartha Gautama?

Siddhartha Gautama noticed that those who have taken up an ascetic life style or a way of life appeared to have outer calmness and possibly some level of inner clarity. He found that neither the material wealth at his disposal nor the ability to please all his senses would yield inner peace. Based on the observations, He concluded that his experiences might have surpassed the ordinary limits of a human being. As an ascetic, He went to several teachers to learn how to discipline the mind. These teachers through cultivation and channeling of the mind were able to reach various planes of existence where inner peace could be found. Prince Siddhartha experienced these planes of existence; but observed that this inner peace tended to simply vanish no sooner one reached the plane of the human reality.He deduced that the ultimate inner peace as a human being could not be reached using this approach. Based on the prevailing wisdom, he experimented with physical hardship as an approach to reaching inner peace. There again he failed.

He realized from experience and observation of life events, that he needed a totally different approach to meet his objectives. He considered a systematic approach to investigating the human reality. He had already developed clarity of mind and with systematic investigation discovered the cycle of birth and rebirth fuelled by craving, thus discovering the noble truth and the cause and effect relationship to reach the goal of eternal inner peace, the nibbana. The approach of Prince Siddhartha is very similar to that of a scientist; internalized observations, analysis and deductions (analysis of dhamma). He developed 73 aspects of wisdom and knowledge to fully discover the reality and the power of the mind. Buddha discovered that while developing and cultivating the mind, one must be completely immersed in human reality in order to reach that point. This was His discovery.

So what did the Buddha teach?

He said that in order to discover inner peace as a human being, it is very important to first understand and experience the defilements disrupting the inner peace in the human existential reality. In order to do so one must observe and experience each moment of life as it happens.  Buddha taught us to adopt a way of life that allows us to build upon our life experiences and observations.That requires confidence in the teacher and that of his teachings. As normal human beings we require some level of comfort and confidence that we are going along the right path. As such “shradhdha” means, confidence in the teacher and his teachings.

As human beings we are all governed and subject to the same vagaries of life. We all fall sick, we age, we are fearful of the unknowns; we feel anger when things do not go according to our wishes, and so on.Some of us do not have the level of confidence that is necessary to be fully independent, both in terms of thinking and developing a way of life. The notion of an external agent to guide through this minefield called “Life” is therefore a very welcome relief. It allows relinquishing the responsibilities for life’s realities as well as the fears of the unknowns, with the notion that external agent has our interests at heart and do the needful to get over the life’s realities.

It takes courage to break free from this very comfortable situation and take charge to seek the truth much the same way the Arahats did. Increasing confidence with ongoing character development gives the leadership qualities and the strength to take charge of life with no support from an external agent. As we need confidence to take us through life, those following the course prescribed by the Buddha must also start with confidence in the prescription. Since Buddha is no longer with us, the only things that we have to guide us through this maze are his teachings and the experience of those who have taken a very rigorous path to follow his doctrine and perhaps reached the end goals.

Hence, we must have confidence in those who are making a valiant effort to follow the prescription to the letter and ask them for guidance. Those are the monks who have given up the worldly life to be ascetics in order to develop the level of discipline required to follow a way of life that would ultimately lead towards that internal peace.

Being Grounded in Reality

Unless we are grounded in reality we miss the elements such as fear, anger, jealousy, happiness, desire etc. that impede development. Developing confidence in self, and taking refuge in the Buddha, his teachings, and those who have gone forth helps to be grounded in time of trouble and difficulty. Confidence in Buddha, his teachings, and those who have gone forth, makes it possible to develop the discipline to be grounded in human reality. The precepts not only allow us to live in harmony with ourselves, and with others, but also force us to be aware of what we do with good comprehension. These precepts are not commandments. They are self-proclaimed assertions to avoid potential pit falls. Not only are they danger warnings but also reminders of positive behaviors. The positive behavior allows maturing character to develop independence.  This is paramount to the continuing mental discipline. Well-managed framework of physical and moral discipline provides a strong platform and a foundation for the serious cultivation of mental discipline.  It is very difficult to cultivate mental discipline if we have to battle with the mind each time it reminds us of who we really are. When the actions are in complete agreement with the mind then not only does it develop confidence, but also develops calmness and inner tranquility. One is not agitated, as one would otherwise be. The confidence gives rise to stability.

Meditation does not mean conducting one in a tranquil manner, preferably in a seated position, lotus style, very still, while blanking the mind of all thoughts.It means being vigilant, total awareness or mindfulness as opposed to emptying the mind, if that is even possible.

Stillness of the mind is a prerequisite to fully understanding the reality. Deep meditation and application of calmness and tranquility can lead to states of absorption. When reading a book or listening to music the mind tends to be focused and engrossed with the respective subject.  That is because there is some inherent interest in the subject and the mind wants to be attached to that interest. Why cannot we discipline the mind such that it could be focused on activities that may not have any inherent interest?

Buddha prescribed living with awareness and mindfulness at all times without any reference to the relative importance of the activity. Being focused has the added advantage that it eliminates stress.It is strange that we try to control everything and everyone within our reach. We do not realize that we have no control of any external objects from weather to anything else.  Assuming that we have control is an illusion. We continue in our professional and personal lives completely engrossed in this illusion.Yet that which is completely within our control, which is our faculties and our mind, we make very little attempt to control. Being aware of the mind at all times and what is does is mindfulness and that is exactly what the Buddha prescribed. The control and awareness must persist at all times, not just on a full moon day, when one observes the higher precepts.   it also means, that one does not have to be a ‘Buddhist’ to follow the teachings of the Buddha. Those who follow Buddha’s teachings have no label, just confidence in the teacher and His teachings and are able to develop from their life experiences completely grounded in reality.